As an applications engineer, sometimes known as OptoMary on our OptoForums, perhaps I shouldn’t have favorite customers. They’re all my favorites!

Sure, our products and people have helped build flashy Vegas shows, huge amusement parks, and various NASA endeavors that we may or may not be allowed to discuss in detail. We also have the less flashy water/wastewater installations and beloved "dam customers" that can be pretty Coulee, too.

In these Adventures of an Applications Engineer posts I'll share some of my favorite favorites.

The first few happened to revolve around things in unusual settings. (And I’m not talking about the time I built my own Magic 8-Ball Halloween costume—a little hard to see out of—and managed to get lost in the Opto 22 factory.) I'll start with the green submarine.

We all lived in a green submarine

Each fun project has its own set of unique challenges or memorable—even historic—significance. For example, with the Deepsea Challenge, I was thrilled to help build a one-of-a-kind submarine, the first ever to take a solo diver to the deepest part of our planet’s oceans. More people have been to the moon!

Sure, we liked the fact that the famous movie director, James Cameron (The Abyss, Titanic, Avatar), also a deep-sea explorer, brought the fanciest cameras on the planet to document the whole adventure.

But I was actually more excited about how our PACs (programmable automation controllers) were right in the thick of everything, monitoring hundreds of inputs from dozens of subsystems, including life support. Anyone can send a guy to the bottom of the ocean, but getting one back up, still breathing, takes a wee bit more engineering. 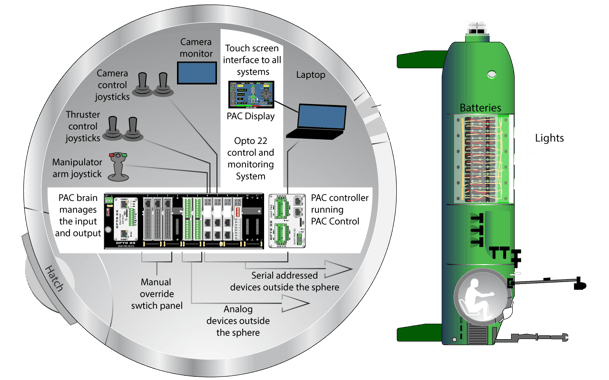 Our PACs also allowed James, in his not-so-giant submarine, to control the lights, cameras, and actions of the thrusters and everything else.

Opto 22 PACs were a good fit not only for their compact size (especially important for a guy over 6 feet, fitting into a pressurized sphere only 43 inches across), but also because we’re all about open protocols and playing well with others. While many of the serially connected Modbus-ish devices were straightforward enough to integrate, a few followed not-so-standard protocols. Good thing our PACs are flexible and versatile.

A few of us at Opto 22 worked on this project, and one of my coworkers noticed James Cameron is left-handed. As part of the UI (user interface) makeover, he suggested the menu/screen selection buttons be moved to the left side of the window, so the pilot’s hand wouldn’t cover the bulk of the screen as he made his selection. As the solo pilot and cameraman, James needed to multitask constantly. 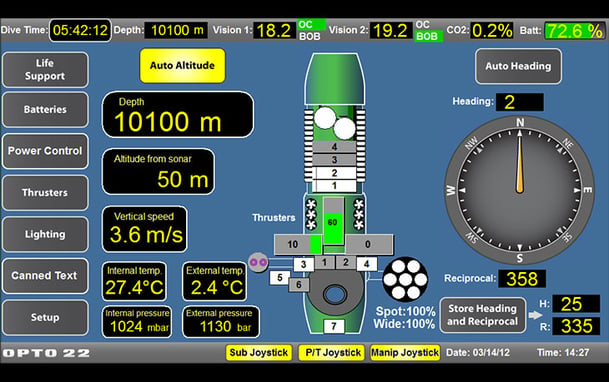 But you don’t need to read a big long book by me on that project, when you could just watch the movie.

Fun footnote: if you decide to make a drinking game out of it and take a shot for every appearance of Opto 22 that shows up on the wide screen, you’ll need a pretty big bottle of your favorite beverage.

Our lesson from our deepsea adventure: choose the right hardware for the job. We might never have known what they were building until after the fact if they hadn’t experienced some performance issues. The joystick controlling the thrusters wasn’t as responsive as it needed to be.

Turns out the original hardware specification included our higher-density modules, which are often great when, as in this case, you think you need every inch of space you can get. However, when you spec a system, you always want to check the specifications carefully.

For I/O modules, be sure to check the Data Freshness and Turn-on Time specs; they can vary widely from module to module, from more than a second to sub-milliseconds. The trade-off for higher density is often a slower response time. Watch that space-time continuum!

Luckily James had room for one more faster, less-dense module on that SNAP PAC rack. So the fix was super simple, and the story had a Hollywood ending.

Subscribe to get my next blog post and learn how we had a super time automating some ballgames.