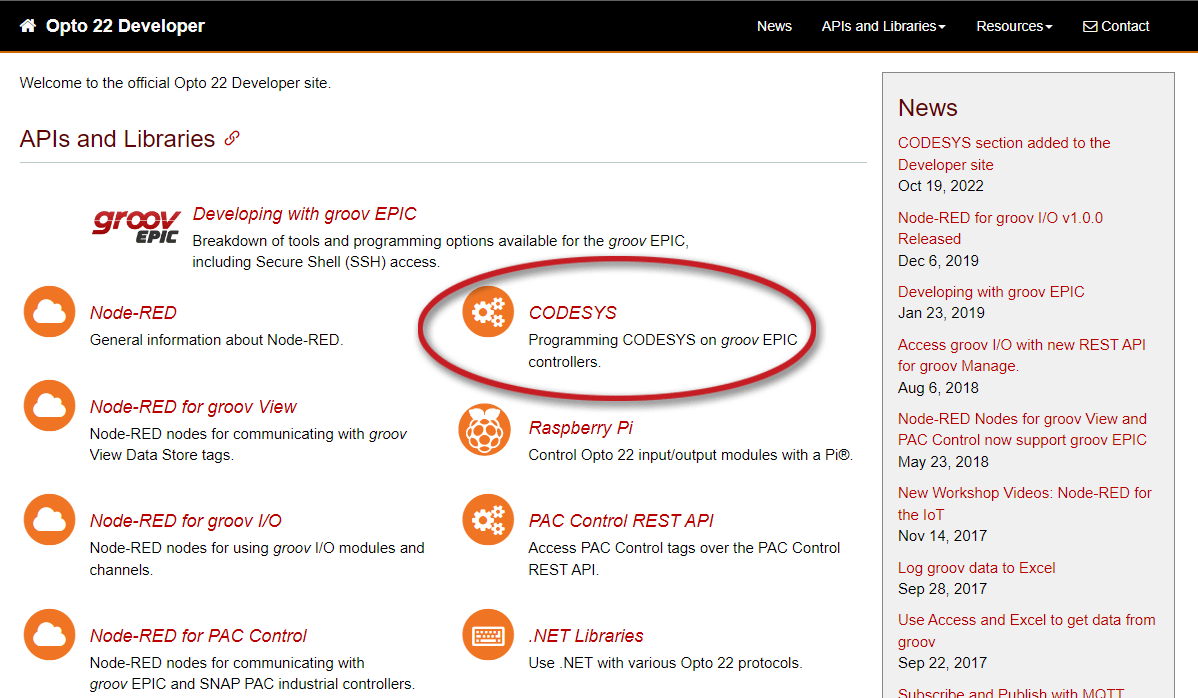 A new section just added to the Opto 22 Developer site supports the latest 3.0.0 release of the Opto 22 CODESYS library package.

If you haven't visited developer.opto22.com in awhile, you'll want to spend some time reviewing our latest technical guides and resources. The site gets a lot of traffic from developers working with groov EPIC, SNAP PACs, Node-RED, and even industrial I/O for Raspberry Pi.

Since all Opto 22 products are designed on open standards, you have a variety of ways to interact with them and integrate with other systems. The developer site helps you do that.

Use Swagger UI to make API calls with Node-RED

Next up in the Node-RED videos series is a tutorial about using Swagger to help set up API calls.

In under 20 minutes, this new developer video from Terry Orchard will take you through all the steps you need to get a solid understanding of using Swagger UI pages to create API calls you can bring into Node-RED. Using them together, you can control all sorts of APIs from your groov device, both getting and posting data, using simple Node-RED.

From Raspberry Pi to Factory Floor

Some developer tips for successfully moving your project from home to the plant floor.

We know a lot of developers love to tinker and prototype projects on Raspberry Pi hardware. I do the same at my house with over 12 Raspberry Pi computers doing different things. It's such an affordable and fun platform with a huge community behind it... what's not to love? The challenge comes when it’s time to move your project from the house/office to the factory floor.

As an industrial automation and internet of things (IIoT) manufacturer, Opto 22 is dedicated to educating and influencing the direction of the MQTT IoT protocol. It's an important part of the product strategy behind our groov EPIC and groov RIO product solutions. Therefore, it was a logical step to join the Eclipse open-source software community to foster further collaboration and innovation around the MQTT and Sparkplug standards.

This new Node-RED developer video shows you how to do more with your data with CSV logging and file storage.

Welcome back to the world of Node-RED. Video host Terry Orchard just completed a new episode on more advanced ways of logging your data. Rather than just logging to a text file, perhaps you want to change your data to a CSV file and save it to a USB drive on the groov RIO. This video gives you simple step-by-step instructions on how to do just that.

How to build a basic UI in Node-RED

Next up in the Node-RED developer video series, this tutorial makes it easy to create your own HMI or dashboard.

When we first introduced the Node-RED developer video series a few months ago, we started off with how to "Set up groov I/O nodes." Once you've installed and configured them, it's time to do something interesting with your data.

This new video does just that. Next up in the Node-RED video series is the Basic Node-RED Dashboard UI Tutorial. 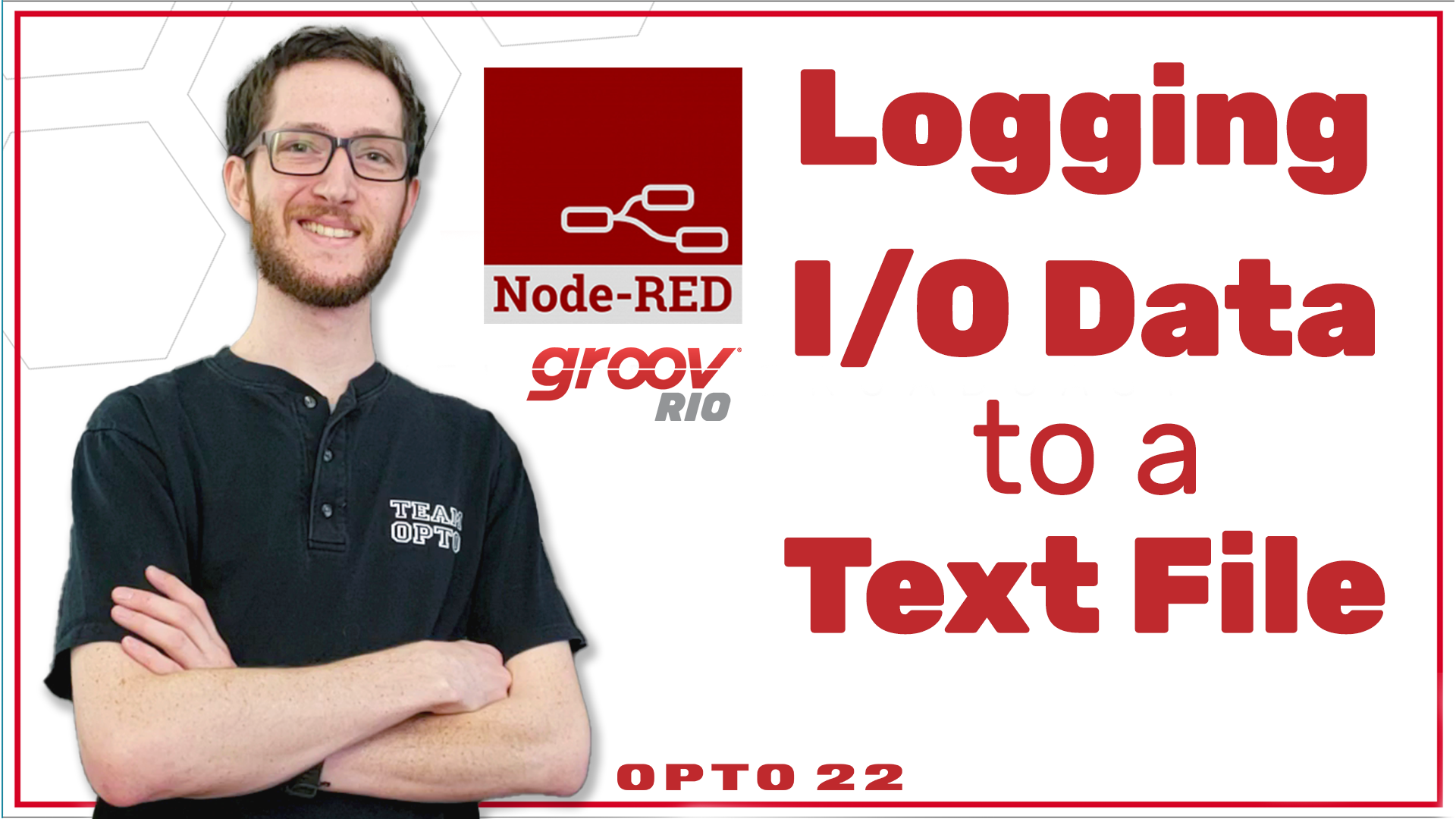 Another week means another video to add to your collection of Node-RED tools and technical tips. Last week our developer video host, Terry Orchard, demonstrated how to create Node-RED flows that interact with groov EPIC's embedded HMI server in "How to use the Node-RED package for groov View". This week, Terry is back in the studio with the groov RIO edge I/O module showing us how to save I/O data to a flat file.

How to use the Node-RED package for groov View 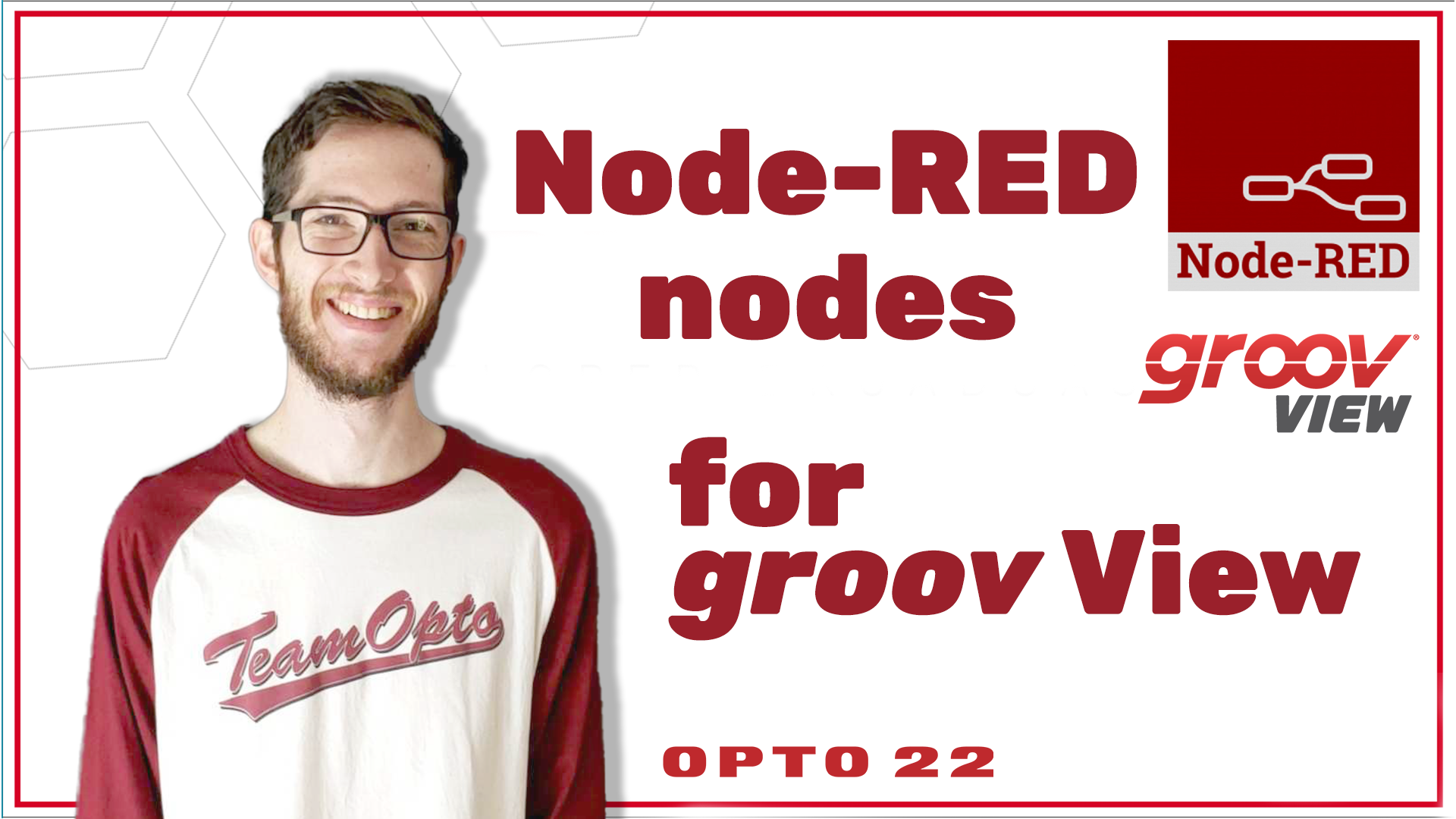 Thanks to all your positive feedback, Terry Orchard is continuing with his video series for groov EPIC and RIO users in the developer community.

Next up: How to use the Node-RED package for groov View.

Learn the power of SSH on groov EPIC

Terry Orchard is back in his studio to give you a video overview of the Secure Shell Access (SSH) feature on groov  EPIC.

Whether you're already using Opto 22's groov EPIC or have been researching its features, it's important to note the extensive programming options it comes with. You can use the easy flow chart-based PAC Control, the familiar IEC 61131-3 compliant languages of CODESYS, or build Node-RED flows to move data.

But, did you know EPIC allows you to build your own custom applications using languages you know like Python, C/C++ and run them on an open, Linux®-based operating system? That's the topic of Terry Orchard's latest video, part of the new Opto 22 Developer series.