Get ready for groov RIO with Ignition 8

As announced previously in the OptoBlog, Ignition 8 software is now part of the newest groov EPIC controller (GRV-EPIC-PR2). But, we didn't stop there. The latest groov RIO MM2 model (GRV-R7-MM2001-10) also includes Ignition 8 and boasts increased memory and storage along with other important features.

Learn the power of SSH on groov EPIC 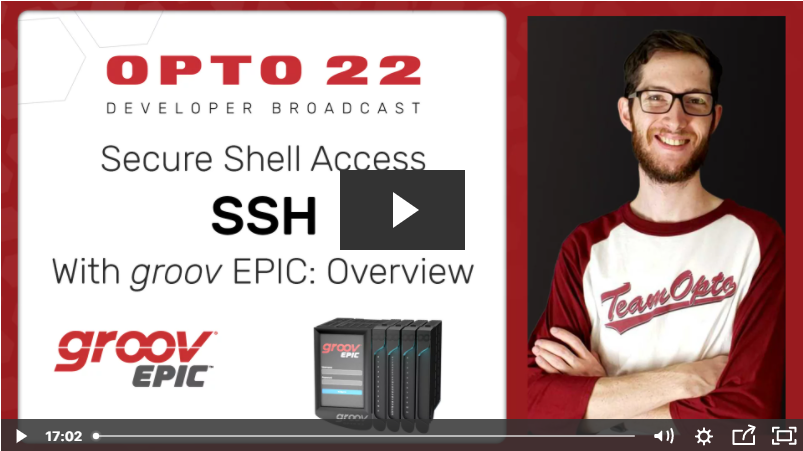 Terry Orchard is back in his studio to give you a video overview of the Secure Shell Access (SSH) feature on groov  EPIC.

Whether you're already using Opto 22's groov EPIC or have been researching its features, it's important to note the extensive programming options it comes with. You can use the easy flow chart-based PAC Control, the familiar IEC 61131-3 compliant languages of CODESYS, or build Node-RED flows to move data.

But, did you know EPIC allows you to build your own custom applications using languages you know like Python, C/C++ and run them on an open, Linux®-based operating system? That's the topic of Terry Orchard's latest video, part of the new Opto 22 Developer series.

Get ready for groov RIO 3.0

There are at least 5 exciting additions in this RIO 3.0.1 package, but who's counting?

TL;DR: If you can't wait to get started, here’s the groov RIO Firmware download page to get your firmware update:
https://www.opto22.com/support/resources-tools/downloads/groov-rio-firmware

As you might have read in previous blog posts, groov EPIC runs a Linux-based operating system that supports a variety of programming and operating options, including optional secure shell (SSH) access. SSH provides root access to the tools, software, and files on the groov EPIC system.

But how does SSH access work, what is it capable of, and is it right for you? In this post I’ll go into a bit more depth about secure shell and the Linux operating system (OS) on groov EPIC and provide answers to these questions.