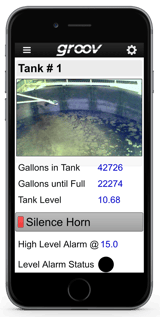 High on the list of things you'd rather not do: clean up liquid waste from an overflowing storage tank.

Avoiding this kind of mess is especially good when your business includes storing and disposing of liquid waste from industry and manufacturing.

That's the business Plummer's Environmental Services is in.

Along with a variety of other services—including hydro excavating, manhole rehabilitation, and emergency spill response—the Michigan-based company collects liquid waste from Midwest industrial and municipal customers, stores it, and treats it.

In the past, tank truck drivers bringing liquid waste to Plummer's would get out of their vehicles, visually estimate tank capacity, and estimate whether their truck contents would fit.

Usually their estimates were accurate, but sometimes...

And find out the three phases of system change Plummer's has planned to not only eliminate overflows at their own facility but also provide better service to their liquid waste customers.