It's easy to get confused between Opto 22 SNAP PAC controllers and SNAP PAC brains.

They're both intelligent processors for automation, some of them look alike, and there's even overlap in what some of them do.

Let's take a look at how SNAP PAC controllers and brains are similar and how they're different.

At Opto 22, the big difference between a controller and what we call a brain is the ability to run a control program (a strategy). A control strategy you've built can run locally on a controller; it can't on a brain.

Both controllers and brains are intelligent, though. The brain has a number of features built in that provide local intelligence, but they don't require programming (more about that later).

All SNAP PAC controllers and most brains communicate over Ethernet and have two Ethernet network interfaces. But they're different in how the two interfaces function.

You already know what a controller is. Opto 22's are programmable automation controllers (the PAC in SNAP PAC), which means they're essentially small multifunction computers that you program to do what you want.

That might be monitoring sensors and devices, controlling anything from a light bulb to an entire factory, or acquiring data from real-world things so you can use that data elsewhere. Or all three at once.

You program SNAP PAC controllers using Opto 22's PAC Control, a flowchart-based programming environment with optional scripting. Scripting is appreciated by engineers who have programming experience, while flowcharting is pretty easy for anyone to pick up. (And you can attend free, hands-on training at our factory and headquarters in Temecula, California.)

In addition, multitasking hardware SNAP PACs run over Ethernet and know a lot of protocols, all of which can be used simultaneously (great for interoperability and system integration):

Did you notice the RESTful API in that list? Yes, our hardware PACs have an application program interface (API) based on the REST architecture, so you can write custom programs in a wide variety of languages (to read from or even write to the controller's variables and the I/O it's connected to). 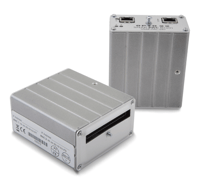 A SNAP PAC brain mounts on a rack next to SNAP input/output (I/O) modules—analog, digital, and/or serial, all on the same rack. The I/O is wired directly to sensors and equipment, and the brain processes information between I/O and the controller or a custom software program you build.

Some of these features are automatic; some require a little configuration. But none of them requires any programming. Because these features run locally on the brain, they provide two advantages:

Like our controllers, SNAP PAC brains are flexible in the protocols they support. Ethernet-based EB brains can be used with Allen-Bradley PLCs and other automation systems, because they support:

Choose your controller or brain

SNAP PAC controllers and brains include:

For complete details on features for all of these, see the recently updated SNAP PAC Controller & Brain Comparison Chart.