From a young age I have been looking up at night. Not sure exactly when I fell in love with astronomy, but I can recall looking up at the stars every chance I got as a kid.

I have ebbed and flowed with the amount of time and equipment I have had to spend on the hobby. In Australia I had a fully enclosed fiberglass domed observatory, which I chose to not ship over when my family moved to The States, but the desire to look up has not gone away.

Only the constellations at the horizon can be seen in both hemispheres, and even those look upside down compared to what I used to see. So I wanted to get something up and running fast here that would allow me some time to get my bearings in the sky and to share my new stars with my mates back in Australia via my personal website.

In this week's blog, I would like to share what astronomy tools I currently have set up, thanks to some Opto 22 hardware and groov.

Since we live in a suburb that has a pretty strong homeowners' association, I need to be a little careful what I stick on my roof. Even TV antennas are not allowed. So right now we simply have a plastic tube, with a low-light video camera fitted with a fisheye lens mounted in it that points straight up.

Here is a photo of the setup when I first put it up to test the concept. 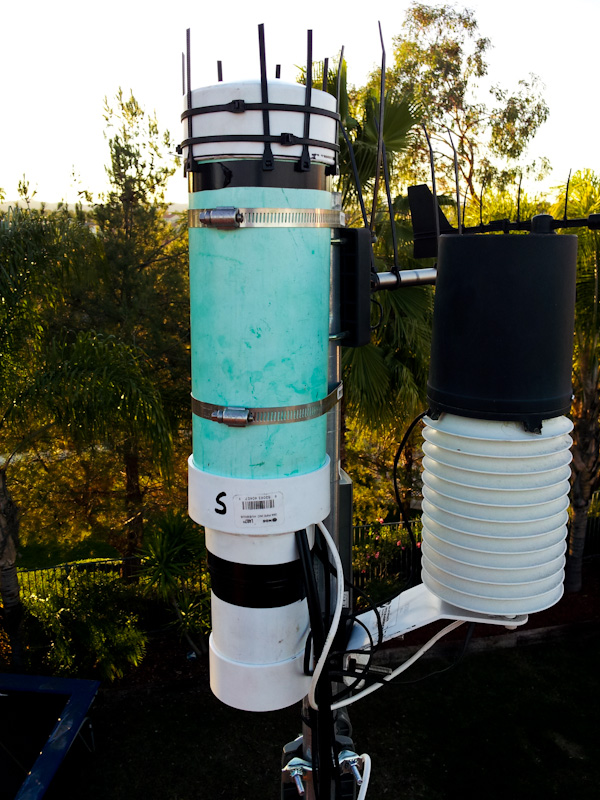 I have since painted it a dull green to match the trees.

Next to the video camera are my sensors for my weather station.... Perhaps a topic for a blog some other day.

I guess your first question is what is it with the zip ties sticking up like that?? Here is a screenshot of what I  saw moments after I first put the camera up…. 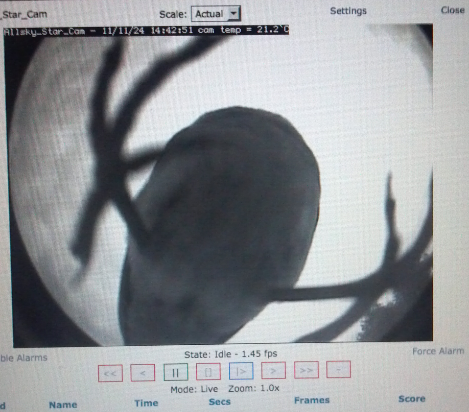 Without the zip-tie bird "guard" it was a pretty constant perch, and if you have ever looked below where birds perch, you will see they also, uh, go about their business… which tends to block starlight from hitting my astronomy camera!!!

In order to both quickly view and control the camera, I have put the whole system on some Opto 22 hardware and displayed the video and data in groov. 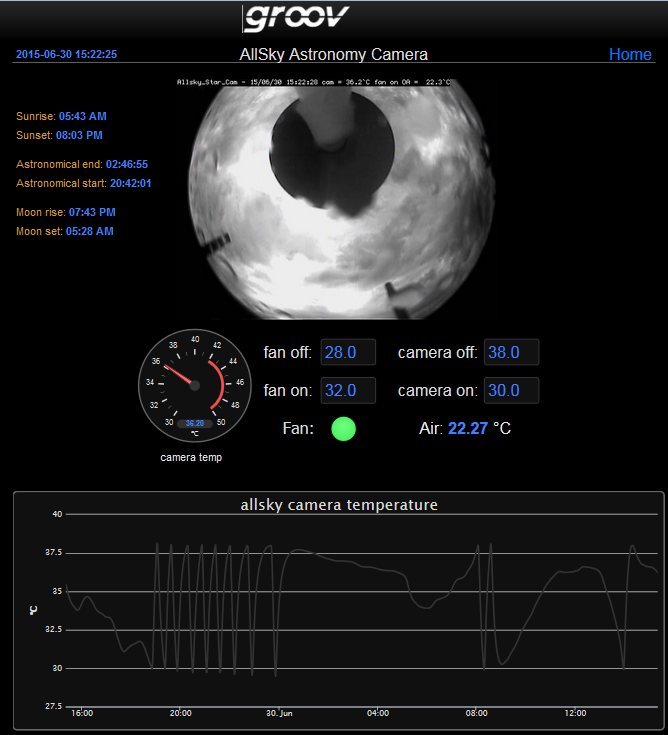 To the left of the video feed you can see some helpful data for when things get dark and when the moon will rise, etc. I used some code from the OptoForums to do an API call from the SNAP PAC controller to a weather service to pull the sunrise/set and other data. You can download that code (and more) from the code samples forum area.

I found that the camera sometimes overheats in its case though the day, so have had to add a fan. A simple ICTD probe inside the case monitors the temperature, and a digital output turns the fan on and off. If the fan cannot keep up, then the power to the camera is turned off by another digital output till it all cools down. Heat is a very efficient weapon in killing the sensitivity of a digital camera. Thankfully this pretty much never happens at night. I have considered turning the camera off at sunrise and on again at sunset, but have found that my mates back home like to see the weather when they visit my website, so I leave it running through the day when I can.

Let's take a closer look at that video image. 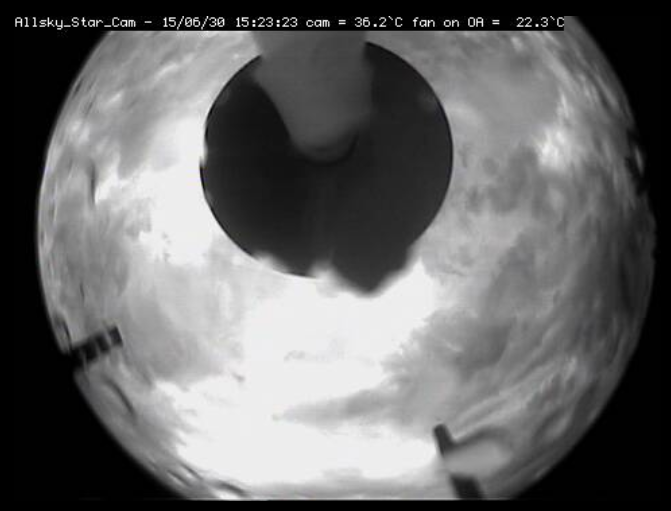 I took this screenshot a few weeks back when we had a nice storm come over. (The large circle is a "temporary" antenna for my aircraft tracking setup—a subject for another blog some day.)

The point of interest in this screen shot is the data across the top of the live video feed. I use a Linux software package called Zoneminder to take my many component video camera feeds and turn them into URLs that are simple .jpg images. This way I can display them on the web and in groov very quickly and simply.

The data on the top of the video feed is live. Once a second the PAC controller puts the data into a string, which is then sent to the Linux computer on a specified port. Here are the guts of the code:

You can see that we simply get the data in string form by getting the ICTD probe analog input and converting it to a string. This is done in another part of the control flowchart using the PAC Control command "Convert Float to String." We then append a few degree Cs, some spacing, and then a carriage return (chr13) and line feed (chr10) to terminate the string. We then transmit that final string out the comm handle that points to the IP address and port number of the Linux PC. Zoneminder takes care of the rest.

It's string commands like this that really show the power of PAC Control's optional Optoscript: you can build the whole string in just one line of script. Sure, you can do the same thing with action blocks in the flowchart, but it is a lot easier to read and see the end result in the one line of script.

Now let's take a look at what the camera can see on a moonless night, without the aircraft tracking antenna in the way! 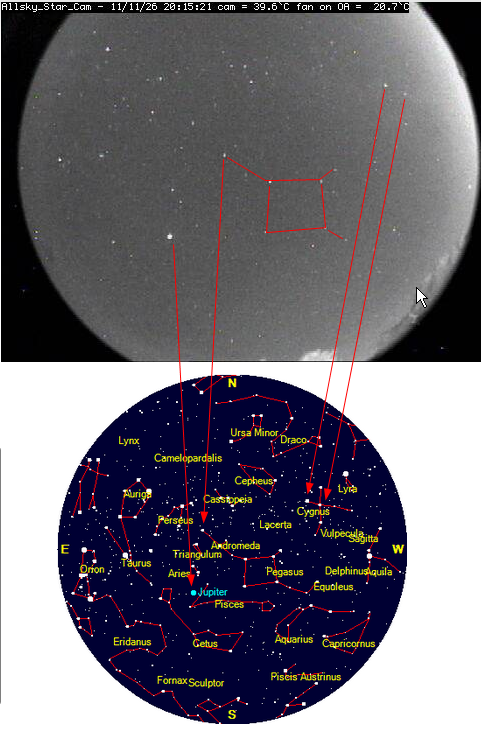 (The mouse cursor in the picture is parked on the trees in the back yard; they give an idea of the horizon-to-horizon view the fisheye lens gives.)

Granted, this picture is from a few years back, just after I got it going, but it still gives a similar view now, and the added star chart helps you get oriented. As you can see, the camera can see most of the major constellations in the northern hemisphere. There are many that I could not see from Australia, so it's all new sky for me. Added to that, the ones near the equator that we could see from DownUnder are upside down, so it takes some re-orienting and re-learning. For example, Orion looks amazing when he is the right way up! You can even see the International Space Station pass overhead, which is fun to catch.

Right now the allsky camera does one main job: it allows me to quickly view the sky and share it with others around the world. Its future role is to serve as a finder scope for the groov-connected telescope that I am building, and yup, you guessed it, that is a topic for a future blog!


groov is quick and easy.

The allsky astronomy camera gets used many times a week, by me via groov on my phone, and by my mates and other people around the world who stumble upon my website.

groov and Opto hardware allowed me to get the camera up and running and under control really quickly. I could build both PC and mobile pages for viewing the night sky in Temecula. And when I am traveling or if it’s cloudy at my friend's location, we can just jump on either groov or my website and view the starry sky in Southern California.

Granted it's not strictly an automation use case (hey, I automated the fan, right?), but that's just one of the many things I love about the Opto world. It has so many different capabilities it can easily be pressed into service doing the most diverse of tasks, big or small.

Till next week, keep looking up at night! Cheers mate.