Learn what's possible with MQTT and how you can use it to unlock all the value your OPC systems offer.

By now, you've probably heard about MQTT. Since its creation in the late '90s, it's become the most popular protocol for IoT applications, repeatedly touted by organizations like the Eclipse Foundation, big players in cloud services like Microsoft and Amazon Web Services, and influential automation vendors like Inductive Automation.

Originally designed for SCADA, MQTT went on to establish a foothold in early smart infrastructure and consumer IoT messaging applications before making a reappearance in the automation world in the push for greater connectivity between OT and IT systems.

MQTT is free and open source, so it's easy to experiment with its lightweight, scalable architecture for sharing data across domains. It's also easy to secure and familiar to many IT engineers, which means you'll have less of a hassle getting projects approved.

But what about OPC UA?

However, for most automation engineers, MQTT is an unknown quantity. Besides the perception that MQTT is relatively new, it's not one of the standard specifications promoted by popular automation vendors or industry collaborations, like the OPC Foundation. This fuels the debate around whether MQTT or a protocol like OPC UA should get preference in these connected industrial applications.

Here's the first thing you should know about that debate: Don't worry about it.

OPC UA and MQTT actually work together beautifully. With the right tools, you can gain all the benefits of MQTT's open, secure architecture and easily integrate all the data from your existing OPC UA hardware and software.

So is this a rip-and-replace deal or what?

The second thing you should know is that this is not a recommendation to replace all your existing systems. While there are more MQTT-ready sensors and devices popping up all the time, it's perfectly suitable, and even recommended, to keep your existing OPC infrastructure in place.

MQTT makes an excellent data-sharing backbone, but it's not feasible or advisable to completely convert existing automation systems to MQTT. Instead, there's a simple pattern you can follow to scale up a new MQTT infrastructure in parallel with your existing OPC UA systems.

To see this pattern in detail, download our white paper, "Industrial-strength MQTT/Sparkplug B: Building industrial MQTT networks at scale with edge computing."

Opto 22's recommended approach to building industrial MQTT infrastructure relies on a related concept to IIoT called industrial edge computing, which facilitates connectivity and data processing by distributing those functions at the edge of the network.

This architecture allows you to connect existing OPC UA systems (and even proprietary protocols) at the point of use without modifying existing control systems or infrastructure.

Below, you can see a high-level illustration of what the pattern looks like when all the components are brought together. 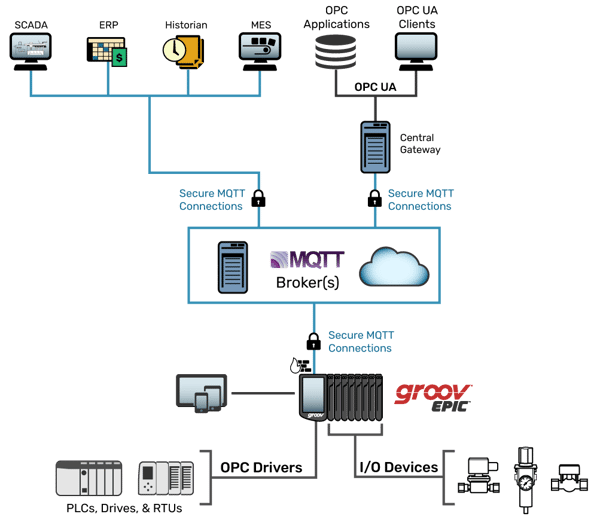 In our white paper, you'll learn how to use MQTT and edge computing to share data efficiently between data producers in the field and data consumers throughout your organization, whether they speak MQTT natively or not.

How do I stay ahead of the technology curve?

MQTT is the most popular protocol for the internet of things and is quickly making its way into industrial applications.

As founding members of the OPC Foundation and having extensive product experience using the MQTT protocol, Opto 22 designed this white paper specifically for engineers, developers, and digital transformation leads who need to evolve their systems for scalable, secure data distribution.

It includes all our expertise from 48 years of automation experience and close partnerships with influential MQTT contributors like Inductive Automation, HiveMQ, and MQTT's co-inventor, Arlen Nipper.

We've watched the progress towards increasingly more connected automation systems and want to help you get all the information you need to get started on your own MQTT journey.

You don't need to replace your OPC systems to do that, regardless of their age.

In fact, using our approach, you can seamlessly convert OPC tags into MQTT topics and back, wherever your application requires it.

Is MQTT worth the investment?

For industry great, John Rinaldi, the answer used to be a fairly resounding, "No." But even he has recently (and respectfully) changed sides:

"[The] market has spoken, and it hasn’t chosen what I proposed. In fact, the market has run from my advice. In fact, it has galloped, dashed, raced and hurried to do the opposite: implement MQTT by the boatload. So, today I capitulate and become an MQTT supporter."

Here's what some of our customers had to say about building their data infrastructure on MQTT:

"We disconnected a controller and within a millisecond the system reported the failure. It really is that easy: change a variable and it shows up in the broker, then on your mobile phone."
-- Frank Fisher, Engineering Superintendent, Waterford Township DPW.

Is MQTT a magic bullet, though? Definitely not. It still takes plenty of engineering talent to understand and implement an MQTT-based data network in a way that is secure and scalable.

Get started today by downloading our white paper or checking out our other resources on industrial MQTT.