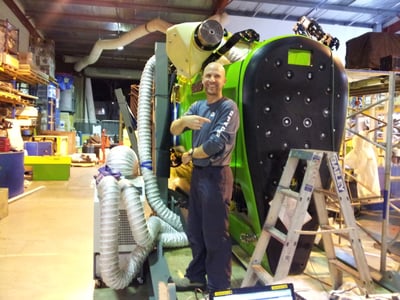 At the time of the dive to the hadal zone, Jim would be only the third human in all of history to visit that Deep Trench zone, nearly 36,000 feet (~11,000 meters) below the surface of the ocean.

The Mariana Trench was first visited by Don Walsh and Jacques Piccard in January 1960. In fact, Don was a member of the team out at sea with me, and I still clearly recall having the chance to talk with him at length—not just about his dive, but how it changed his life and led him to consult with Jim and the team on our efforts to revisit that dark underworld. 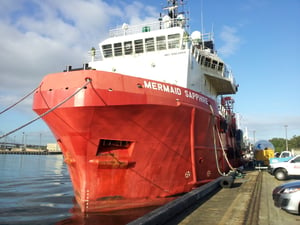 Some 36 thousand feet under the hull of the Mermaid Sapphire, anything that dropped overboard would—some 2-3 hours later—end up being crushed by the 15,700 pounds per square inch of cold hard pressure. You don’t just drop in to say "Hi" to the seafloor while floating above the Mariana Trench. It had taken some members of the team longer than 7 years of true grit to build every last part of the submersible that Jim would pilot.

I had many surprises at the time I was getting up to speed, not the least of which is you can't go to the "deep ocean hardware store" and buy anything—anything—that could survive at full ocean depth (beyond basic titanium nuts and bolts). Everything was custom-made and hand-built.

Coupled with this was the amazing experience of seeing the team build and repair every and any device with just the pieces and parts they found on the ship. There was no helipad, so we could not get parts airlifted in. What you saw around you was all you had. No Prime 2-day Delivery at sea!

This teamwork and resourcefulness tends to stay with you for a good while long after you step off the ship. It's just a quiet self-confidence that you can pull off the amazing when and as needed.

While I have not been back out to sea at all over the past 10 years, I still have a fascination that manifests itself in little ways. I follow the sub-Reddit r/HeavySeas. I follow a few deep-sea divers on Twitter and have spent some time reading about the team that followed Jim's endeavors, including Victor Vescovo and the Triton submersible.

More than this, 10 years later, the boy that did not want to go to the hospital is now my co-worker. Terry and I work together at Opto 22 doing new product development, technical marketing, and moderating our Forums.

In the past 10 years, the world has seen many changes, but the human quest to explore and learn has not changed at all.

For a look back at this deep-sea adventure, visit the Deepsea Challenger case study page for technical descriptions of the controls systems used. Or watch the video that documents Opto 22's involvement in this historical dive.

James Cameron documented his historic dive, and released it as a feature film: Deepsea Challenge. Can you spot Ben in the film?