A typical day started arround 6 a.m. Getting up and getting into the mess to grab some breakfast and coffee, lots and lots of coffee.

Incidently, the food on the ship was fantastic. We had a young European cook who listened to one of my favorite DJs, Armin Van Buuran, while he was cooking... very cool.

Every morning at the factory and in the bridge on the ship, we had a team meeting at 7 a.m., usually around half an hour in duration. We each reported on the status of the system(s) we were managing. Mostly we were reporting if we were "go for launch," and if not, why not, was any other system holding our system up and how long would it take to get it ready.

After the meeting, it was, literally, all hands on deck.

One of the first things to go into the water were the landers. These two science platforms took water samples, deployed bait for the camera to record any critter activity, provided sonar ranging and other data like water temperature and water column currents, etc. to the team.

In this photo you can see the lander team get one of the landers ready for launch. Also very visible in this shot is the orange hull of the diver launch and recovery boat. After the launch, this boat then carried communications equipment for tracking the sub while it was underwater.

During each dive the Opto 22 system was programmed to send a roughly 40-character message every 3 minutes through the hydro-acoustic modem. (Data was more efficient than voice, and it freed the pilot up from having to give regular status reports.)

One of my jobs during the dive was to keep an eye on the data coming in from the sub. If any data was out of range or unusual in any way, I was to report it to the DO, or dive officer.

This next photo shows the typical screen full of data that was pushed up by the modem. Mixed in with the Opto data is data from the modem itself.

Of note is you can see where the data was not able to be decoded because it had too many errors in the transmission. At first, when these messages were missed, it caused some concern. You could not help but think, "has something just gone wrong?"

But after a few more dives, we had a lot of confidence in the sub and systems and saw the glitches as just a passing fish causing distortion to the signal (or something minor like that—and yes, there was the odd joke about a giant squid).

Here is a photo of my view from the seat next to the computer screen displaying the Opto messages.

On the left is John Garvin. He performed many roles: life support specialist, sphere internals designer, layout, construction and communications officer, just to name a few. In this photo John is in contact with the pilot (Jim for this dive off the cost of Papua New Guinea).

Next to him in the blue shirt is Paul Roberts. Paul is an underwater communication and positioning specialist. Here he is tracking the sub's position underwater by using a GPS clock on the sub and the ship and looking at the difference in the "time of flight" of the signal from the sub to two different surface receivers.

On the right is Tim Bulman. Tim has a vast skill set, but in this case, he was taking the data from Paul's system and handling the navigation side of the sub positioning. 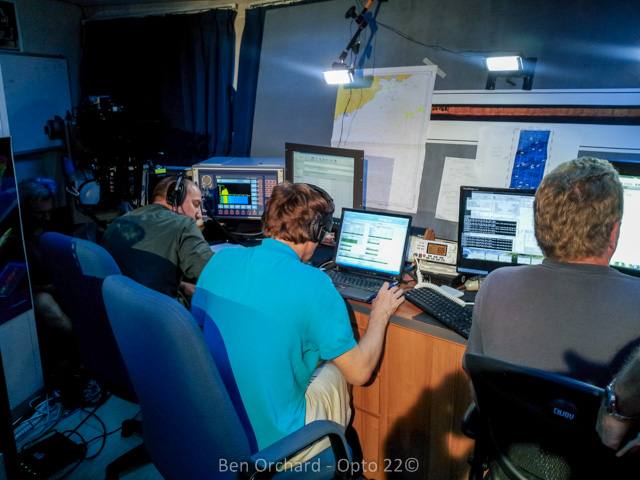 Note the ever-present camera on the far left corner. They were never far away...

Between dives, one of the many tasks to be done was recharging the batteries.

Sounds simple, right? Well, each battery was made up of many cells, and since they all got warm while charging, and we were in the tropics with high ambient temperatures, we had to keep the batteries cool while charging.

How to keep that many batteries cool while at sea?


The sub was desgined with a built in water cooling system.
Once again, it's hard to not hear that position holding system at work (if you missed it, there is a video of Jim getting in the sub and noise we were working with in part 4 of this blog).
The guys tried to recharge the batteries while no one was around, for obvious reasons, it made working on the sub just that much harder.
We also did a lot of charging at night while the temperatures were lower, and this ensured that the sub was fully charged for the next days dive.

Let's wrap up this series of blogs with a shot of me working in the pilot's sphere. 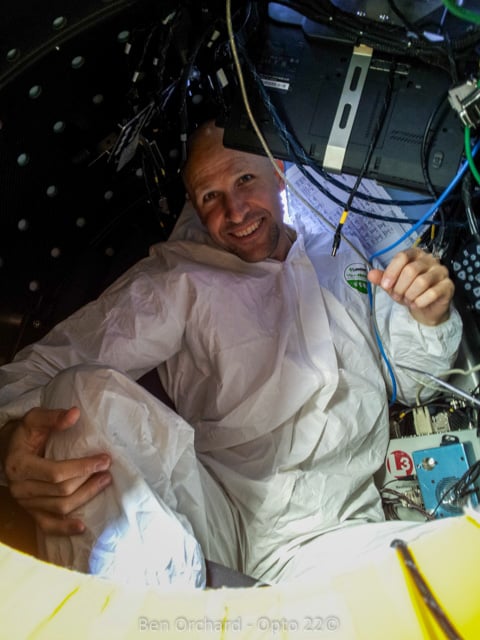 We tried to keep the sphere as clean as possible, thus the white suit. The reason was to keep the environment clear of all possible flammable materials and substances (the wrong kind of grease, for example, can out-gas some nasty fumes when hot in a high-oxygen environment).

Dive day was always a busy day. Getting the sub ready, going through the pre-dive check list, getting the sub launched, watching the data during the dive, and then recovering the sub was always exciting and at times stressful. Powering down the sub, going over the data from the Opto system, and getting it ready for the night transit often saw us working until 2 a.m.

Long days sure, but we were making history. Pretty amazing stuff.

Just a few days ago, on March 26th, we had the third anniversary of Jim's dive to the bottom of the Mariana Trench.

It was an amazing journey getting there. James Cameron, Ron Allum and the team were just outstanding to work with, and Opto is very proud to have been part of history in the making. 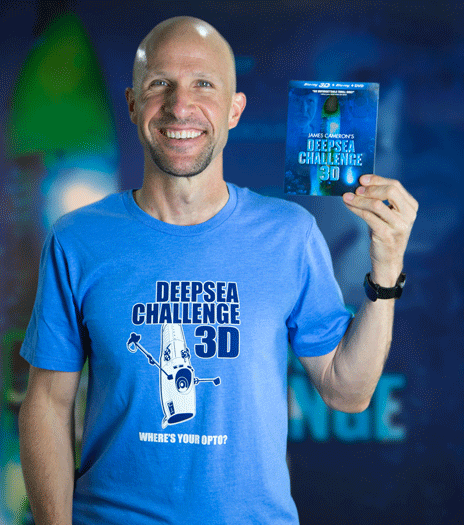 Follow this link, confirm your contact details with Opto 22, and you can enter the drawing for a T-shirt and a copy of the movie, Deepsea Challenge 3D.

We'll give away T-shirts each week, so don't be shy. Enter the drawing.

Ok, well, that's it for Deepsea Challenger for now. Perhaps around next year's anniversary the ol' memory banks will stir again and we will share some more "tales of the sea."

What's in store for next week's blog?
Subscribe to the blog and you won't even have to remember to check it out—we'll send you an email the moment it's published!