Getting to the Edge with Industrial Communications

Getting to the Edge with Industrial Communications

A look at how edge devices and interoperability standards are paving the way for the fourth industrial revolution.

As we enter the so-called fourth industrial revolution, which aims to finally close the gap between distributed automation systems and business systems, let’s take a quick look back at some of the developments that got us here and where they point for the future.

The PC revolution of the ‘90s led to the popularity of the Microsoft Windows operating system (OS) and broad interest in using its graphical interface to see what was happening on the plant floor. But the automation industry had expanded rapidly in the preceding decades, introducing many new protocols and devices.

To use Windows, early SCADA and HMI developers had to create a suite of proprietary software drivers to communicate with every device the system might encounter. It was a time-consuming and expensive process and, in the race to expand the available portfolio of supported devices, it generally led to very limited driver functionality.

In response, Microsoft and a small group of automation vendors—including Opto 22—developed OLE for Process Control using Microsoft’s Object Linking and Embedding (OLE) technology. Now called Open Platform Communications, OPC defined a common specification based on a client-server model that allowed Windows-based SCADA/HMI software to communicate indirectly with plant floor hardware by means of an OPC server, which housed all the drivers needed to communicate with those devices.

With OPC, vendors could more easily develop software for industrial systems and the quantity and diversity of data that could be extracted improved. 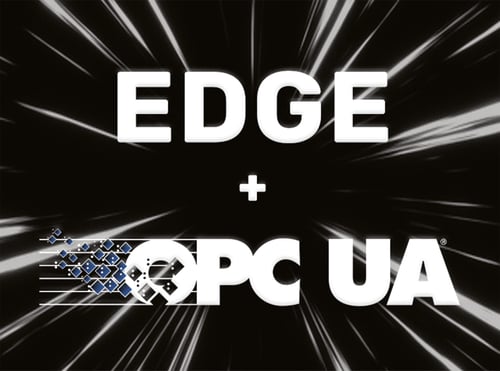 But challenges remained. Taking advantage of OPC required a Windows-based computer or server to exchange operational data from plant floor devices with the software that needed this data. OPC Unified Architecture (OPC UA) was developed to meet this challenge by making it possible to run OPC out at the edge of networks, directly embedded into industrial processors and devices.

At the same time we saw much greater interest in closing the gap between automation and business networks. As a result, automation manufacturers began introducing edge-oriented controllers and I/O systems. These devices offer state-of-the-art, powerful CPUs that combine traditional real-time control and sensing functions with the communication, storage, security, and data processing functions previously found only in higher-level systems.

Together, OPC UA and these new edge controllers and I/O systems significantly simplify the task of communicating operational data between plant floor systems and the software systems businesses rely on every day.

This combination has brought us where we are today, with modern concepts like the industrial internet of things (IIoT) and Industry 4.0. We can clearly see the value and significance of open-source protocols and software. We can work on long-neglected capabilities like cybersecurity for industrial systems. We can again draw on innovations in IT to outfit control systems for the tasks we need them to perform.

Our history points clearly to the future, where edge computing capabilities and powerful software running on these platforms are ushering in new levels of industrial communications. As automation professionals working on digital transformation, we can see how edge devices and interoperability standards are paving the way for companies to flourish.