Get some tips on using the groov RIO EMU with other Modbus TCP devices.

The Modbus protocol has been around since the late 1970’s. This is both amazing and cool. Amazing as some reading this have been using it since then (how time flies!). Cool because it's been around so long, and well established and widely used.

Opto 22 products have been supporting Modbus TCP since way-back-when. Out of the box, our devices are Modbus TCP slaves (now called "servers") and can be polled for data on specific register addresses. The groov RIO EMU (Energy Monitoring Unit), one of our newest products, is no different. 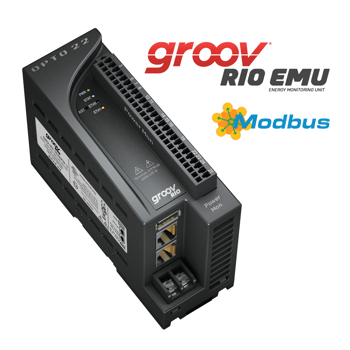 We know many of our customers and integrators have already deployed RIO EMUs in many different applications. However, it was only a matter of time before one of them wanted to deploy about 60 RIO EMUs on a wide area network that was already polling some other Modbus TCP devices. Their very reasonable question: Could we provide a CSV file (comma separated values) of 64 Modbus-specific device registers for the RIO EMU's data and energy values?

While their use case was polling the RIO EMU from an Ignition system, the same Modbus registers can be used by any Modbus master (now called "client") that needs the data.

My task then was to fire up our groov Manage Modbus calculator and get busy ‘mowing the lawn’ as I say; moving from data point to data point and mapping that to the Ignition Modbus TCP module, and checking that the data matched the RIO EMU’s current values.

While usually a bit of a luxury, I sure appreciated the triple monitor setup I have in my office at the Opto factory. Live RIO EMU data on the left screen, Ignition in the center, and the groov Manage Modbus calculator on the right. That said, it still took a bit of time to get them all in order.

Best thing of all? Now that I have done it, you don’t have to!

I have written up a new OptoForums post titled "RIO-EMU Modbus csv for Ignition and other Modbus master software" with details about each value/line in the CSV file along with an attached CSV file.

As pointed out in the post, this is not just for RIO EMU, and it's not just for Ignition. I have also included a more generic CSV file that should serve you well to get up and running in short order with any Modbus master (client) application.

EPIC power modules can also make use of the same CSV files by doing a little offset math, all explained in the forum post.

Hopefully this will give you a solid head start in using our energy and power monitoring hardware over the tried and tested Modbus TCP protocol.

So what are you waiting for? Check out that post on the OptoForums.

After all, you can’t control your power costs if you aren’t measuring them!