Everyone here at Opto 22 knows that updating any controller's firmware is not a trivial task, and when in a production environment, it’s not something that can be done at the drop of a hat.

That said, sometimes we fix some bugs that require a minor point firmware update and the latest 3.4.3 release is just such a case. If you are using groov View or the new Data Services feature, then you should look closely at this release as you determine where updating your controller(s) should be prioritized in your jam-packed schedule.First up, the groov View fixes:

The video gadget could get in a state that caused it to wrongly indicate that you are running your groov View in trial mode. That's fixed.

Another bug fix for the video gadget: Some users' permission level would blank out the video gadget. This was never an option for this gadget and should never have happened.

A bug where some page permissions got changed has also been fixed.

We also had to address some fixes to the Data Services: 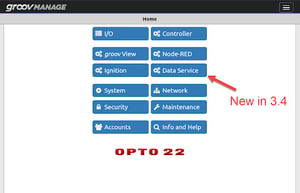 Some extra point features that did not have their ‘Make Public’ option selected were getting sent. For example: on-latch, counter, max and min values.

The Data Service was also not sending the expected MQTT death certificate when restarted.

Lastly, 32 bit integers that were to be represented as boolean values were not set to boolean, but remained as 32 bit ints. All of these bugs are fixed in firmware 3.4.3.

By all accounts, the addition of the OPC UA server has been a huge hit for a large number of our customers (and for their customers, too). Everyone at Opto is excited to be able to enable the democratization of your data using this tried and tested protocol.

Bugs creep in even with our best efforts, but acknowledging them in an open and timely manner is also part of the Opto 22 creed. You can view more details of any of these bug fixes by looking at the knowledgebase on our website or by reviewing the groov EPIC firmware release notes.

You can download the latest version of firmware by logging into your manage.groov.com portal.