Let’s take a quick look at the topic of sinking and sourcing outputs.

Where did the difference come from, and where does it matter in automation?

Quick answer: you often have to choose the correct module because the device you are wiring requires either a sink or source. For example, if you have a prebuilt electrical cabinet, it may be wired using a common positive or a common negative method. Thus you HAVE to choose the correct digital output module for the way the panel is wired.

Thankfully, you don’t have to worry about choosing between sinking or sourcing when it comes to alternating current. Since AC swings back and forth between a positive voltage and a negative voltage, it requires a different switching method. It’s direct current (DC) where we have to choose.

A little background re: the construction of transistors. There are two types, NPN and PNP. They are built differently at a silicon level and switch currents with different methods. Back in the day (1950s to 1970s), transistors could sink (NPN) more current than they could source (PNP) for the price, so a sinking or sourcing decision made a difference in cost. In fact, even today many electronic components have asymmetric current drive ability and can switch more current to ground than to the positive rail.

The other place sinking and sourcing made a difference was on the electrical panel company’s shop floor. Some companies built their panels to have a common positive rail, and some built them to have a common negative rail. Sometimes the layout of the electrical equipment lent itself to one or the other way, but often it was simply a case of “that’s how we have always done it.”

This is where we, the automation guys and gals, come in to sort it all out and make it work. Since we are talking about DC circuits and how our loads are wired, we have to pick the right kind of digital output module to switch those loads.

If we are retrofitting an older non-automated control cabinet, say one that is full of relays, we need to take a look at how it’s wired. We have to think about the cost of rewiring versus just buying a digital output module that will fit in with the cabinet’s existing common-positive or common-negative wiring.

A modern example of this choice would be an LED quad-color stack light. (Sometimes called a tower light, it is a stack of red, yellow, green and white colored LEDs in a housing). Does it have a common positive, or a common negative? We usually cannot change the stack light wiring. It is built either way by the manufacturer. We then need to pick a digital output module that can drive the four lights to the specified rail and thus turn each of the LEDs on as required. One of the most common quad-color stack lights has a common-anode (positive) lead. 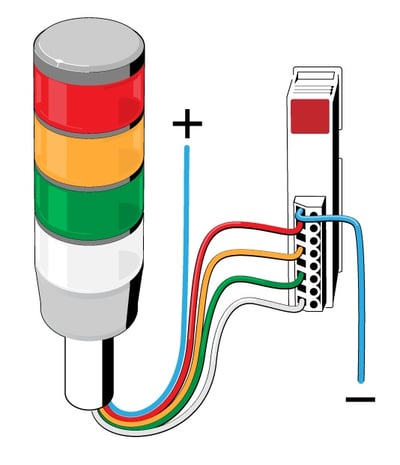 In this case we would wire that to the positive power supply rail, wire the other four legs to our digital output module, and then wire the digital module’s common to the negative rail of the power supply. This is a sink configuration. We turn on the digital output, the power is sourced from the positive rail, flows through the LED, is switched through the digital module, sunk to ground, and the LED is turned on. Therefore, the module you would be looking to drive this stack light would be the SNAP-ODC5SNK.

To clearly see the difference between an Opto 22 sink and source module, check out our animated demo.

But what if you have a mix? What if, say, your stack light is common-cathode (negative), but your machine electrical panel is wired as common-anode (positive)? Rewiring the whole panel is not an option, and neither is ordering a different stack light. You have to automate what’s there. What can you do?

In this case you can look at using an isolated module, where all 4 digital output channels are totally separate from each other. With this channel-to-channel isolation, each channel can be wired as either sinking or sourcing. In this case you could select the SNAP-ODC5-I or SNAP-ODC5A-I.

So there you have it. In automation we often do not have a choice. We have to choose sinking or sourcing either because of the way transistors are made, the way electrical panels are wired, or the availability of the electrical/electronic parts we are given to use.


Till next time. Cheers Mate.