Nothing like a cold shower to get you moving:

Most of us never give any thought to our hot water service pilot flame. But when it goes out...cold shower first thing in the morning, anyone?

The first time it happened, I simply re-lit the pilot and showered with cold water. After the third cold shower, I knew it was time to be a little more proactive!

I am going to cut to the chase and state up front that I don't know for sure why the pilot light is occasionally going out on my gas hot water service. I have a theory, but that's all it is, a theory. (Keep reading for the reveal at the end.)

Here's the important thing: It has only flamed out a total of 6 times since September 25th, 2012, so it's not like a regular occurrence. BUT when it does happen, it seems the only time I find out is when I step into the shower!

With that disclaimer out of the way, what have I done about it?

Since simply relighting the pilot light gets the service working again, I figured all I had to do was detect the flame and thus the flame fail. (Side note: In Australia, you are not allowed to automatically relight any pilot flame, so regardless of the legailty in California, I am "pre-programmed" not to automate it.)

The sooner I could be alerted to the fact that the pilot flame had gone out, the sooner I can relight it, and the less chance of encountering another cold rush of water during a shower.

Flames are hot, so I figured it was just a matter of getting a temperature sensor of some kind to sense the presence or absence of heat, and I should be on my way.

I began hunting around in my garage, and found an old thermocouple. I have no idea what type thermocouple it is (J, K, L, etc.), but for my application, I didn't need to know the type. I just needed to know heat or no heat.

Since I didn't know the thermocouple type, I configured the input as a generic millivolt input on a SNAP-AITM module. This SNAP analog input module can be configured for type E, J or K thermocouple, or -150mV to +150mV input. The latter was my choice in PAC Control.

A quick test with my cigar lighter proved that I was seeing a clear change in the value as I heated and cooled the thermocouple probe. Now, it was simply a matter of mounting the thermocouple in the water heater pilot bay. 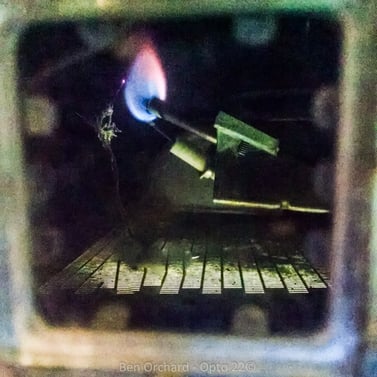 Seeing a chance to gather more data, I simply moved the thermocouple to the side of the pilot.

Now I have three distinct temperatures: cold when everything has gone out, warm when the pilot light is lit, and hot when the main burner is on.

Here is how it looks in groov. 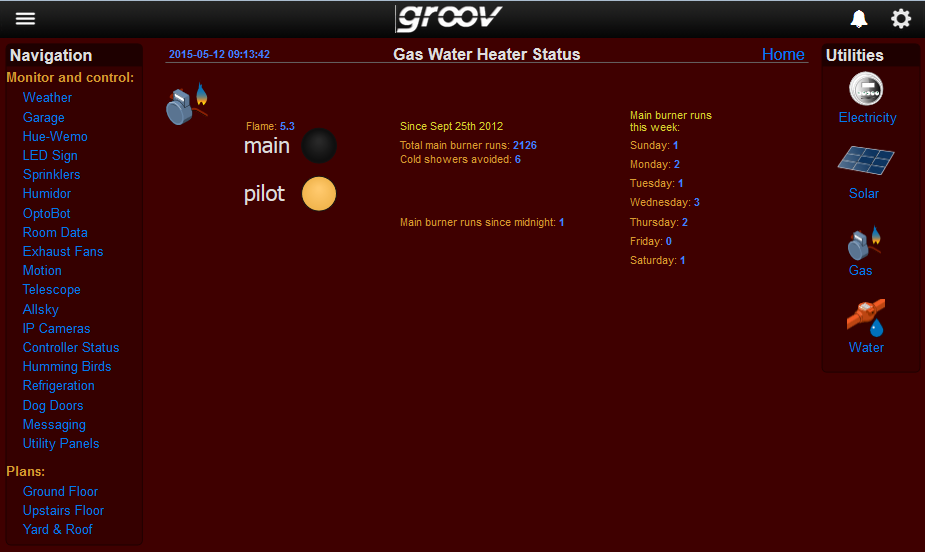 As you can see, with the three digital states, I can accumulate and store all sorts of interesting data.

I have the generic number for 'flame.' In my PAC Control strategy, I have used a simple if greater than analog var, then set int32 var true command to turn the LED gadgets in groov on and off.

As the int32 variable changes state, I keep track of the number of times this has happened. Why?
Because I can. But mostly because I am a data lover. More data is always better right? (Well, mostly always - check out my blog on Deepsea Challenger graphic screens to see the other side of this idea.)

I also keep track of the total number of times the main burner has started. To do this, I use a persistent variable. (Subscribe to this blog so you don't miss my blog on backing up your persistent variables before doing a firmware update and restoring them after!)

I have set up an email account in the PAC controller so it can send me a notification every time the pilot light goes out. As you can see, I have had 6 emails since late 2012.

The table of data to the right is worth a little story. For no reason at all—other than data is beautiful—I keep a rotating weekly log of how many times the main burner has started each day.

I never gave it much though until a recent trip back to Australia. I was showing my mates Downunder all the groov screens I have made and when I got to this one, I noticed that there were three days in a row that the main burner had not started. While my wife and I were in Australia, my college-attending son was at home taking care of the house and dog.

I will definitely discuss more about our dog Malcolm in future blogs (trust me, it's a lot more techie and interesting than it sounds), but I think he is the reason the pilot light is going out.

We had no trouble with the hot water service up until we got a doggy door installed. Here is a graphic that shows the situation. 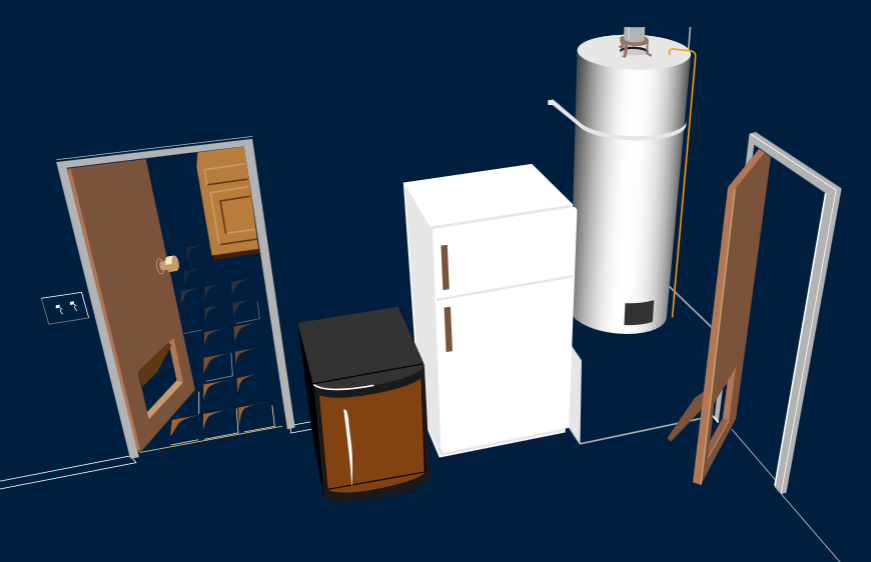 As you can see, the doggy door is very close to the hot water service. My theory is that if the wind is blowing, and Malcolm goes through the door at his usual Mach 0.9, a shock wave of air blows out the pilot.

That's my theory, and I'm sticking to it!

So, until week, be sure and check out all the millivolt module options with SNAP I/O from Opto 22. These modules have lots of uses other than for just thermocouples, but of course they work great for thermocouples, too (if you know what type you have).